The Sons of the Voyageur 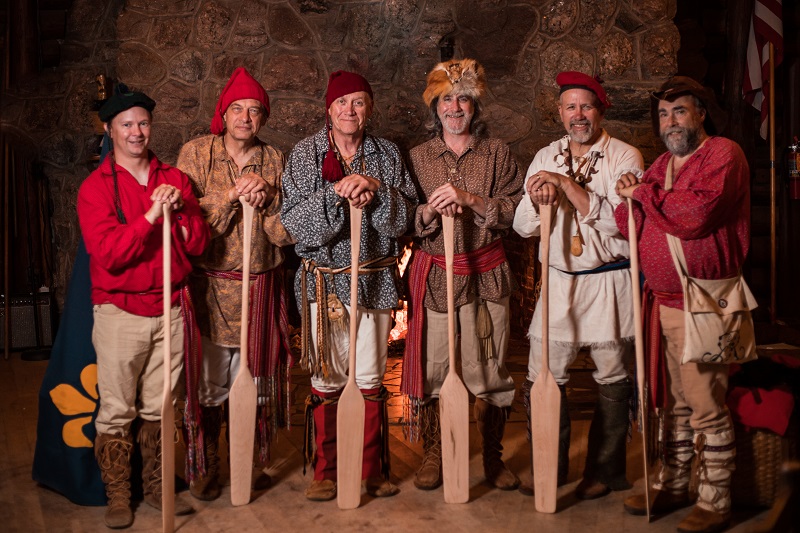 Journey back in time with the Sons of the Voyageur. These engaging "edu-tainers" bring the fur trade era to life through songs of the voyageurs in a multimedia rear-projection slide presentation featuring close to 100 images. In their interactive musical theatre performance you will hear authentic fur trade era songs sung a capella in three and four part harmony, and be led from Montreal to Grand Portage as the lifestlye of the Voyageur is portrayed in authentic period costume. An extensive collection of paddling, working and playing songs form the basis of this exciting historical overview of the life and times of a voyageur.

Les Fils du Voyageur have been singing together since 1976. Originally started by music professor Bill Otis, who had been researching music of the fur trade era and arranging songs of the Voyageurs for 3 and 4 part mens' voices, the group dresses in authentic period garb and has travelled the entire midwestern region from Lafayette, Indiana to Winnipeg, Manitoba, performing these songs as well as logging songs and Great Lakes sailing songs. After a hiatus of some years the group re-formed in 1996 and began recording their album, Bien Travailler. The group consists of (left to right in the photo) Grant Herman, Tom Yost, Gary Hecimovich, Tom Draughon, and Ron Hobart. The Sons of the Voyageur offer several performing scenarios to meet your needs, including a fully scripted multimedia slide show presentation with a large rear projection slide screen. The show is approximately an hour and a half long and has almost 100 slide images. Other scenarios include a shorter slide show for school audiences and mainstage festival concerts, dinner lecture series, and rendezvous. Ron Hobart was a member of "La Salle Expedition II" and is an expert on fur trade canoes. We have been known to paddle rivers and even Lake Superior in full regalia singing with our paddling to the great delight of onlookers at events. We'd love to sing for you too. Some samples from our latest CD, "Canot d'Écorce ". can be heard by clicking the MP3 links below.

The Sons of the Voyageur Have Appeared At These Fine Venues: